‘We need to all get-together and figure this out’ said the star when speaking in an interview about her struggles with PTSD after being ‘repeatedly raped’ at 19.

Lady Gaga took to Oprah’s stage in Fort Lauderdale, Florida for an in-depth interview with the host whom she brought to tears. Gaga revealed on Jan 4, 2020, how her exponential career path as her own self-made ‘superhero’ helped her cope with the aftermath of her ordeal. 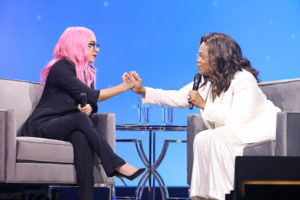 The star spoke out about being raped by someone she knew and how she never processed the trauma. Also revealing that she did not have a therapist or doctor to help her through that time but said that she ‘suddenly became a star who travelled around the world’ instead. The 11 time Grammy award winner continues to be an advocate of mental health and self-care, urging everyone to ‘make the best life for themselves as possible’.

Lady Gaga released Til It Happens To You Sept, 2015 in support of a charity helping others who have survived sexual assault.

An Interview with Nathan James of Inglorious: By Alex Alicia Media

ASHLEY SHERLOCK joins me for a whole lotta music chat, including news of his upcoming tour dates!