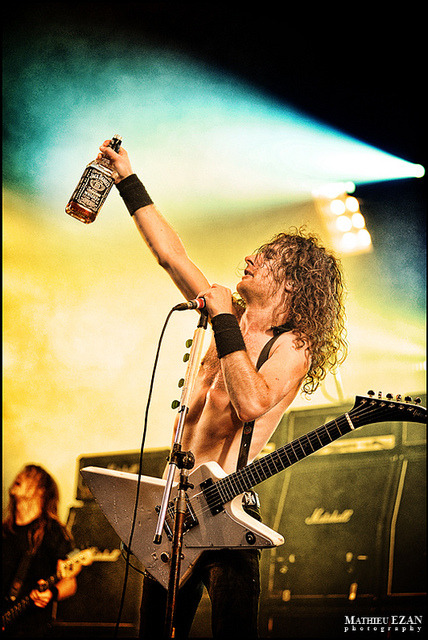 Winners of the 2008 ‘Best New Band’ award hosted by the Classic Rock Roll of Honour Awards. We’re now over ten years on and the band is still reaching new heights with headline European tour dates, festival slots aplenty and a lot, lot more. 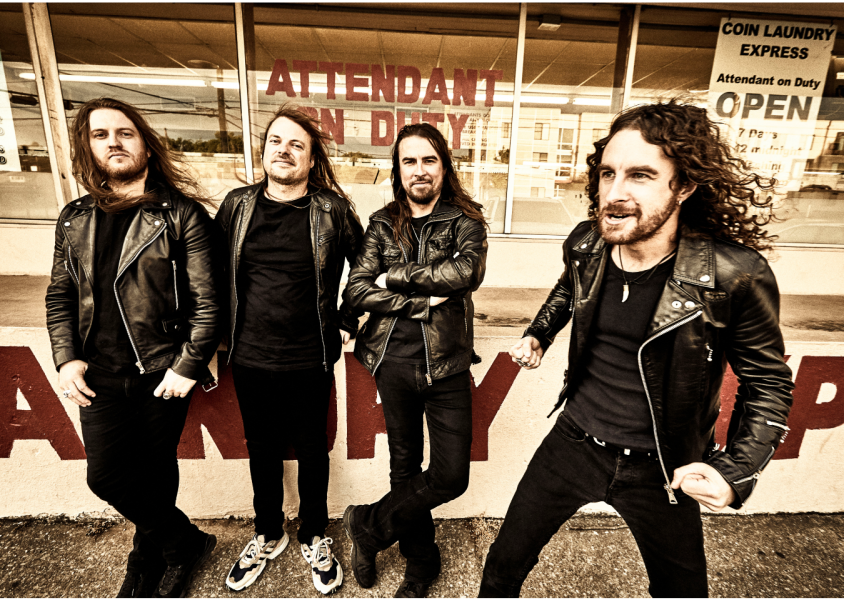 Rock n’ roll enthused, Boneshaker is raw, energetic, bristling and only thirty, yet enthralling and upbeat minutes long, which for a rock album is pretty short. But is this the greatest album from Aussie rockers, Airbourne to date? I think so! Joining me with the same opinion it seems is Andy Copping, organizer of the UK’s biggest rock festival, Download Festival, another individual certainly on board with the new album, who has, in turn, added the creators to his annual event once again. A statement appeared recently on their popular app in regards to a recent announcement that, Airbourne will be back next year. When talking about Boneshaker, Download said: “Its ten songs in thirty mins, alive and bursting with attitude and intent.” The band is now set to play the aforementioned festival for the fourth time since 2010, complete with what I believe will be an epic set (if my former experiences of seeing the band live are anything to go by) and all of this and much more will take place in Donington Park, June 2020. If you haven’t got your tickets yet, what are you waiting for? Airbourne’s setlist is rumored to include singles from their latest musical venture including; title track, Boneshaker, She Gives Me Hell and classic party rock song, Backseat Boogie, alongside other, Airbourne bangers such as; Running Wild, Live it Up and Too Much, Too Young, Too Fast. The entire European leg of the less creatively titled; Airbourne the Tour, is currently going down a storm with new and existing audiences and bursting with energy. Much like in the footsteps of their apparent musical heroes and ever comparisons to the hard rock band, AC/DC. But if the current stage show is what fans can expect to see next year then the Australians’ Download performance will be one hell of a show that as usual is sure to fucking rock!

As a result of being added to the, Download Festival line-up for another incredible year, Airbourne drummer, Ryan, brother of frontman Joel O’Keeffe added: “we’re pumped about playing these new songs live, it’s always cool to do that first run of shows on a tour of an album cycle.”

Since Boneshaker’s release on 25 October 2019 via Finnish record label Spinefarm, specializing in the releases of mainly heavy metal artists, the band has spoken to HMV in a recent and intriguing interview. “We wanted everything as visceral and direct as it could be. A song wasn’t allowed to dull or dip or plateau for a moment. It’s a short sharp punch in the face.” And it’s certainly that. Interestingly, the band has admitted themselves that a thirty-minute or under album wasn’t exactly the goal but when they listened back to the tracks as a whole, they decided to cut down on a few songs that were much longer. Figuratively speaking, they just got straight down to the point of the album.

What is, Boneshaker all about? Given that the band sounds something like late 1981 circa of AC/DC, could it be that the album appears copycat or have Airbourne reached a few new heights? In a recent, LouderSound.com album review, journalist, Dave Everley answered the question “Yep it’s similar. Is anybody complaining? Nope, especially seeing as Angus Young and co themselves are currently MIA somewhere between Melbourne and Vancouver, up to god knows what.”

After I listened to the album for the first time, I felt as though the Aussie boys have once again given their fans a total balls-to-the-wall album with plenty of riffs, cliché feel-good rock n’ roll lyrics and a ton of rhythm. When asked by, Radio Metal in a recent interview (October, 2019) about their album producer, Dave Cobb, a man with many modern, yet old-school methods in terms of musical productions, Joel O’Keeffe responded “In music in general, it’s gotten too clean, too perfect, too over-thought about, where it’s almost like a production line. We gotta go back and hand-make this stuff again, with only instruments and a tape machine. People wanna hear a guitar sound like a guitar, not an effect through a digital thing on a computer, like a plug-in. Just fucking mic up a guitar with one mic, with one guitar and play the fucking thing and then record it. And then that’s it.”

Excitingly and in regards to upcoming live shows, sources say that fans could potentially see some new stage tricks from the group, resulting in a few and newly added surprises at their 2020 shows. This would be hugely welcomed given that we all know and can guarantee we’re due an on the shoulder walk through the audience with a guitar played behind the back of the neck and a few swift audience participation drinks. The latter is all good and well, providing we can see some new tricks up Mr. O’Keeffe’s sleeve, or should I rephrase that to his wristband, since he’s hardly ever seen without his torso on full display. With all of that in mind, if the band were to push more boundaries in their live shows and lean away from predictability, in combination with the capabilities of O’Keeffe’s killer vocal pipes, then I genuinely believe that Airbourne could be one of the greatest classic rock bands in the world. The boys set an incredibly inspiring example for those who want to go down the nowadays unpopular recording/performing route, away from greater technologies and just be a hard-working, raw talented rock band without any of the gimmicks. It appears that if you follow Airbourne’s lead, you’ll for sure gain the support from rock fans.

The growing popularity of, Airbourne, over recent years has meant that an affliction for genuine rock bands with the heart for rock n’ roll has seen a further surge of new bands alike. One only has to check out the unsigned gig scene to see for themselves. New talent with old rock vibes is certainly coming through and in popular demand once again with fans crying out for those types of shows. For a second there, I was worried that rock n’ roll could potentially be no more. Things are done so to the book these days and individuals need to be more careful than ever before not to offend. Due to this, I thought, how on earth could a successful rock song be written in modern-day society? Especially if certain phrases or even cliché’s such as sex, drugs and rock n’ roll, a lifestyle that all the great rock stars have lived, written and even sang about, is currently deemed inappropriate by some. But then I remember, in the height of rock music in the late 60s, 70’s, 80’s and even 90s, not everyone enjoyed it, agreed with it and some even hated it. But that’s what made it rock n’ roll, a catalyst for attitude and something much bigger and far more complex. 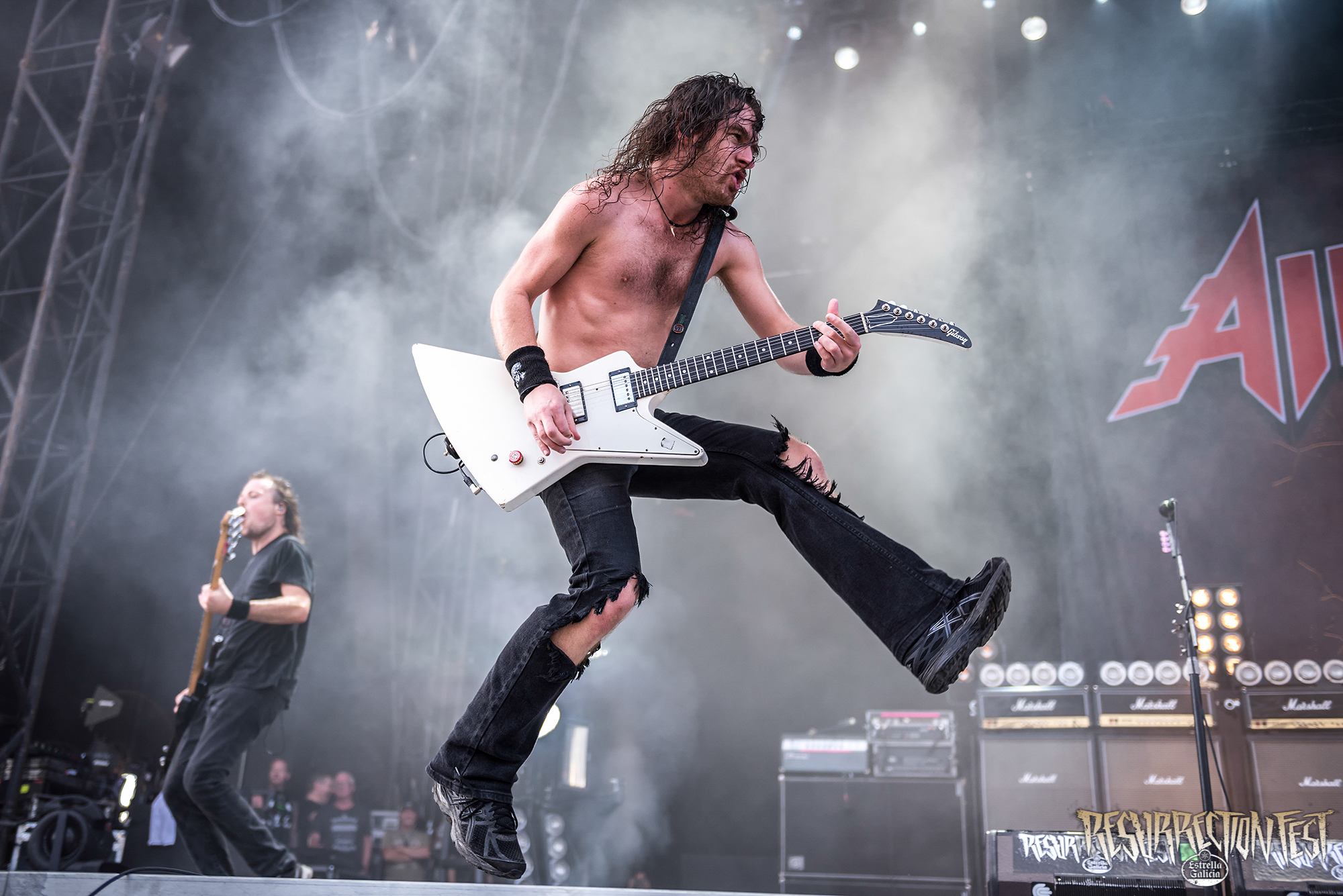 As the final song Ready to Rock comes to an end and the lights onstage die down… “As long as I’m alive, the band is alive and you are alive, rock n’ roll music will never die” – Joel O’Keeffe.

Keep tabs on Airbourne and all that they are up to by following their social media channels.